H/T to Gizmodo and Geekologie for this gem…

Apparently it’s $10 for 6 packets of what everyone assumes is standard yeast, along with an airlock to let the bottle vent pressure.  2 days later it’s ready to drink, although longer times will increase alcohol content.

Yes, it’s slow, and yes, it probably costs more than just buying some cheap booze, which would probably taste better than this stuff.  It’s still a catchy idea that’s likely to make someone a bunch of money.

I wish I’d thought of it.

Okay, this has got to be the best commercial I’ve seen in a long time.  H/T to Ursa Daily News where I saw it posted.

More fun with bacon.  It turns out that not only is bacon delicious, it can be romantic too!

I saw this on Brooks Bayne’s site and had to post it. People everywhere are taking bacon to new extremes of goodness!

Bacon Marmalade: Bacony Goodness by Mistake from SkeeterNYC on Vimeo.

Hat-tip to Illinois Review for posting this cartoon.  According to the caption, it’s by an Ohio high school student and they got in trouble for it…  I haven’t been able to verify that yet.

These guys are just nuts.

We all know our colors, right?  We look at the sky and we see blue.  We look at grass in the spring and see green.  But how do we know that we really see blue when we look at the sky?  What if my eyes are really telling my brain that I’m seeing green, but through conditioning since birth I know that when I see that color, it’s called blue?

And the bigger question: Does it really matter as long as I know that when I look at something blue I know it’s called blue?  Does it matter what iterations are happening between my corneas and my thoughts?

This is a pretty amazing clip of a foul ball being caught by the ball girl at a baseball game. Not only does she make the catch – she makes it look EASY.

I saw this over at “The Conservatives Who Say F*ck“.  Rarely does a commercial get my attention.  Someone at Budweiser should get a raise for this one.

Check these out.  Not only do they sound delicious, but they’re cool-looking too.  Bacon, hamburger, and kosher sausage combined makes my mouth water. 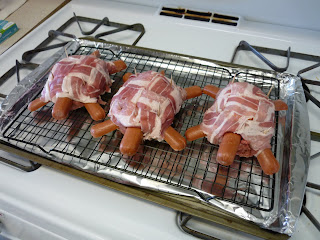 I think, therefore I am. At least I think I am.